February 2011
A few months ago, I found out about the Australia India Design Platform — an initiative supported by the Australia India Institute. This platform is meant to act as a catalyst for creative partnership between the two countries. Additional goals for the program include:

April 2011
Ishan Khosla Design was given the task of finding a suitable name for this program and creating a visual manifestation of the name to be used online as well as offline. We chose the name, Sangam, though Jugalbandi was a close second. Sangam means confluence and although it typically refers to the confluence of the Ganga and Yamuna rivers in Allahabad; it has a broader connotation that is apt in this case — the confluence of craft and design and of Australia and India. We decided that the visual manifestation of the word mark itself should exemplify its meaning and so we came up with the idea of designing the mark and then working with an artisan to physically make the mark we had envisioned on the computer. This then would epitomize the meaning of confluence.

May 2011
My team started working on sketches for applications in various embroidery styles — Soof, Kharek, Rabari, Ahir and even applique. Kachchh has about 18 varieties of embroidery and we wanted to choose those styles that are more complex and colorful to give us a greater challenge.

June 2011
We began looking at the myriad embroidery styles of Kachchh (a district in the state of Gujarat). There are about 20 styles of embroidery in Kachchh and we did a study of these varieties of embroidery styles with the help of the Kala Raksha Online Museum and the physical museum at Sumrasar in Kachchh. We created initial rough sketches that gave a sense of what we were after. However, we soon realized just like actual embroidery, the only way to know if something will work is to actually make it. 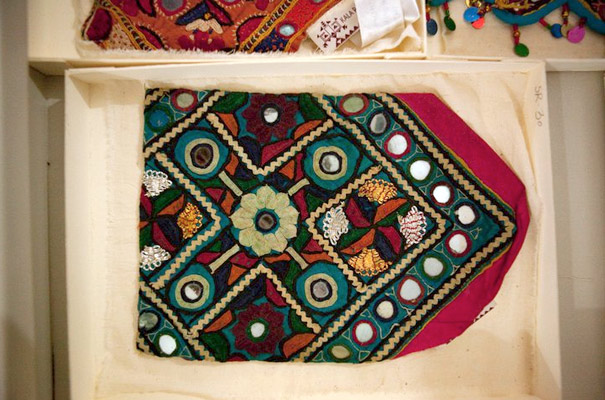 At the Kala Raksha Museum, Sumrasar

July 2011
Eventually we designed 6 or 7 variations based on various styles of embroidery such as Soof, Ahir, Kuchchhi Rabari, Dhebaria Rabari and more. Designing typography and imagining it as embroidery means really understanding the way the threading and the designs work for each type of embroidery. It was painstaking and challenging though we really enjoyed the process. 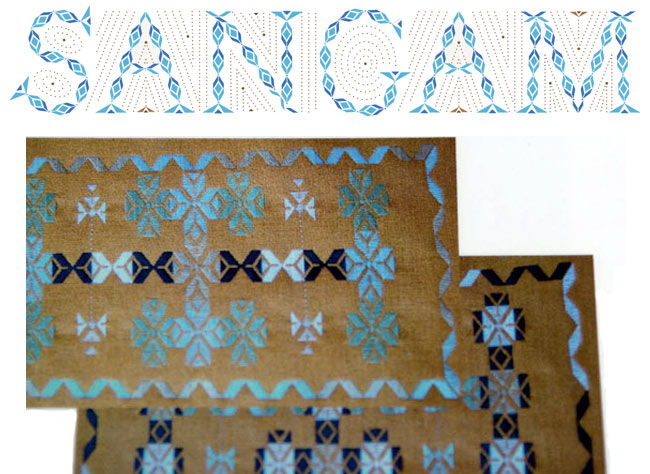 July 10
We started to edit out some of the more geometric embroidery styles such as Ahir and Soof, since they made the typography look computer generated. We selected the design that was inspired by the Dhebaria Rabari embroidery: 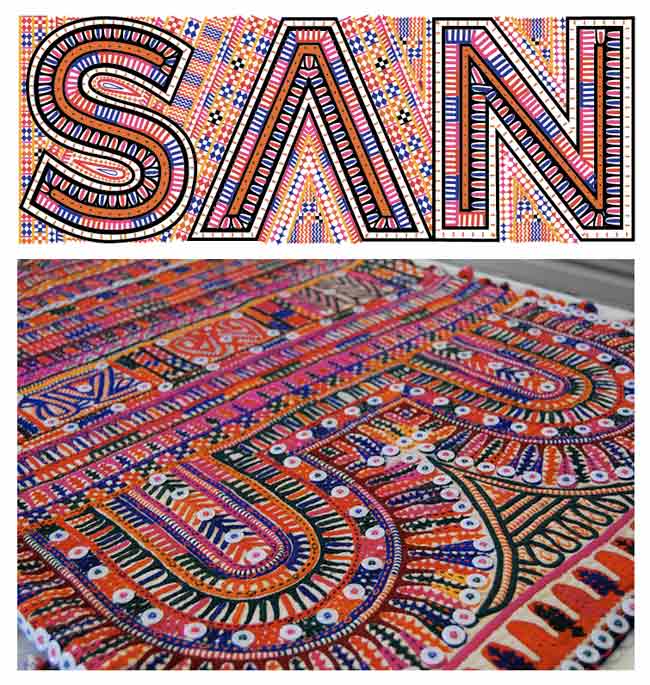 July 15
We then decided to examine various color options. And to truly make the symbol a confluence of the two countries, we decided to look at ‘western’ colors as well as Aboriginal colors, so that while the form of the design would be Indian the color would be Australian. 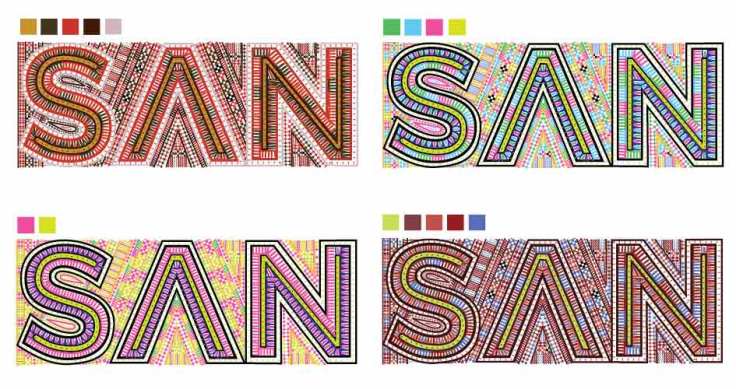 We had previously decided to work with Judy Frater and the team at Kala Raksha I was impressed with the work they were doing, to help sustain the livelihood of the artisans in Kachchh.

July 21
After selecting the final design and color, I headed out to Bhuj, the capital of the district of Kachchh and met with Judy and Harish-bhai, from Kala Raksha as well as and Sajanu-ben, a Dhebaria Rabari who would work on the ‘Sangam‘ embroidery. We met at the Kala Raksha Center in Sumrasar-Sheikh to go over the design in detail. Sajnu-ben experimented with the sizes of the applique work to get a sense of the smallest size she could do the banner in. 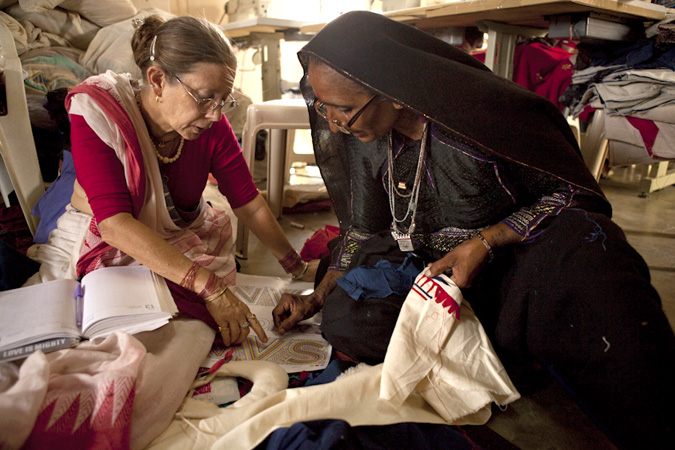 Judy Frater and Sajnu-ben discussing the Sangam embroidery project at the Kala Raksha Center in Sumrasar, Kachchh. Judy is the director of Kala Raksha and Sajnu-ben, who was one of her students, is a Dhebaria Rabari artisan.

After this, we printed the letters to the actual size and transferred the impression to the background cloth so that Sajnu-ben could work with those forms.

We then headed out to Bhuj to buy more cloth for the applique work, I had got thread from Delhi and Ahmedabad for the colors we decided to use. Sajnu-ben had said that she and her daughter would work on it simultaneously from their village. Kukadsar is about 70 kilometers from the Kala Raksha Vidyalaya in Wand, in south-east Kachchh. I had decided to visit them in a couple of days to see the initial progress. Even though we had selected the final version of Sangam to not have black letters, Sajnu-ben and some of the other Rabari women I met later at the Kala Raksha Vidyalaya, strongly felt that black letters would make the design stronger. Thus this is the final version we came up with for Sangam: 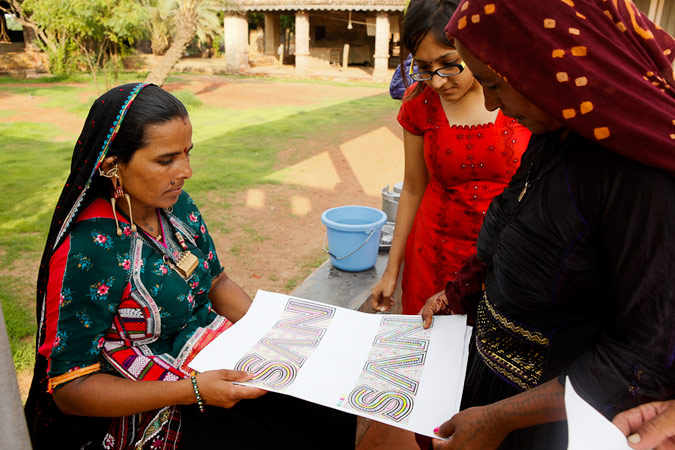 Top and Above: Lakhi-ben and an NID student pour over the various colors for Sangam.

July 25
After a few days I visited Sajnu-ben’s remote village of Kukadsar to see the progress on the work. It was the first time I had visited such a remote village in Gujarat. It’s just a few kilometers from the sea and so it gets a nice cool breeze though the day.

Entering the village of Kukadsar 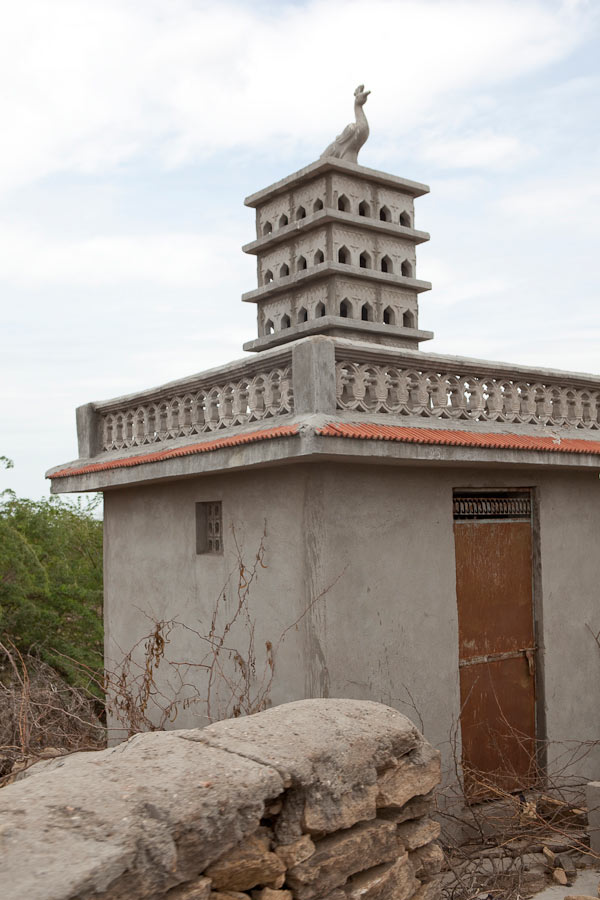 I noticed all villages in Kachchh have a bird feeder that looks like this, at the entrance to the village. 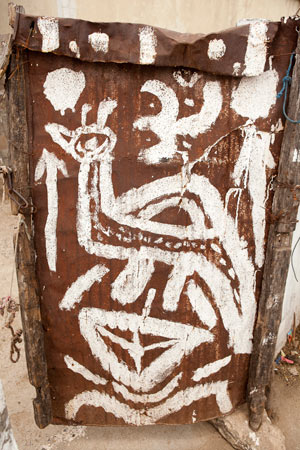 One of Sajnu-ben’s neighbor’s doors. 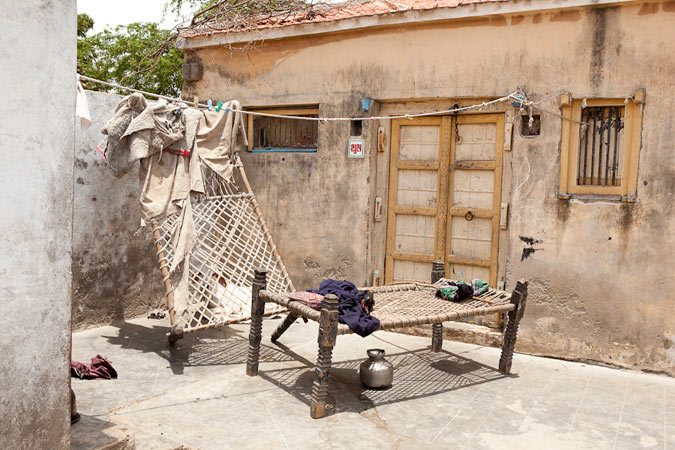 All the homes were all very clean.

Beautifully painted door with stencil work, is typical of these villages.

Sajnu-ben doesn’t speak Hindi, while I don’t speak her languages of Gujarati and Kachchhi. Communication was tricky and so was getting to remote villages such as this, since the bus service in Kachchh is quite rundown. Renting a car is pretty much the only way to get to places such as Kukadsar. Despite these barriers, we somehow managed to meet and communicate. I in Hindi and she in Gujarati and we both with gestures and laughter! When I arrived there at night,  her entire family welcomed me. She had already done two letters — the S the ‘A’. There were some errors in the shape of the S which she also acknowledged. Other than that, she was doing a good job with the embroidery and applique. I explained to her how to tackle the other letters and how she could use elements from the A in the N and M and elements from the S in G.

Harish-bhai from Kala Raksha helping in the translation.

Discussion various aspects of the design and next steps.

I found the process overwhelming in since I am not a textile designer and so my technical knowledge of embroidery is limited.  I started learning some of the ‘buzz words’ used by the Kachchhi people on the fly for instance, bharat kaam means embroidery work and litti refers to the line-work in the design.

Sajnu-ben said she was finding the project interesting since she’s never done it anything with letters before. She admitted that she found the area between the letters overwhelming to follow from the printout, so I suggested to her to keep that area open to her own interpretation and interest so that she also enjoys the process. Most people like a mix of constraints and openness — not everything should be defined, otherwise they’re not as involved. So the constraints were the forms of the letters and the colors while the spaces between the letters were open to her interpretation and aesthetics. We decided to meet a few days later and see how she does the area between the letters.

July 28
I returned for another visit to Sajnu-ben’s to see the progress on work on Sangam. This time I went during the day to get a better look. When I arrived she was working on Sangam. We sat down and started looking at the progress. She had done a lot more. The spaces between the S and A were done as well as the outline of the N. There was a small issue in the corner of the A, where she didn’t know what to create. We figured out what to do with that and she fixed right there and then. We decided what the next steps would be and that Judy and Harish-bhai would supervise the rest of the process since I was leaving for Delhi.

Just as I enter I see Sajnu-ben hard at work.

At this stage 2 letters and the spaces between then were all done. The N had been started as well. About 40% done! 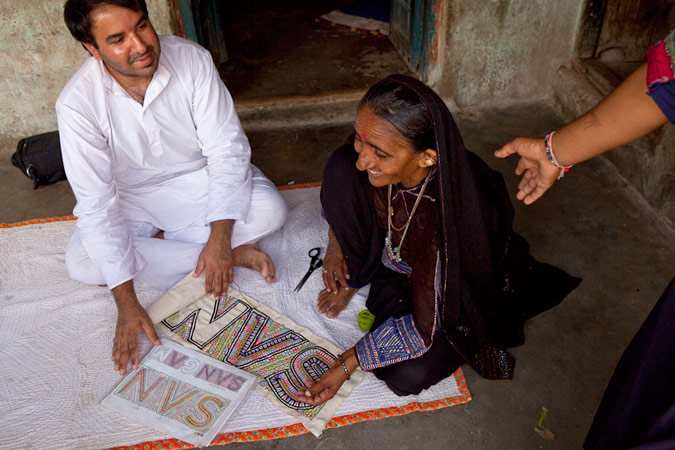 Sajnu-ben doesn’t speak Hindi, while I don’t speak her languages of Gujarati and Kachchhi. Communication was tricky. Despite these barriers, we somehow managed to communicate. I in Hindi and she in Gujarati and we both with gestures and laughter!

Sajnu-ben then went on to show me some of her other work from before like the camel cover and her beautiful little rotla bag, a bag to keep bread warm. After that we said good bye with the thought that we would meet again. I was told it would take her another 10 days to finish and then 2-3 days to send it to me in Delhi. 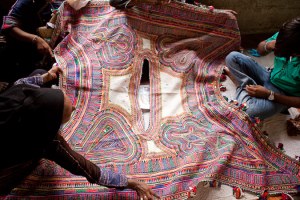 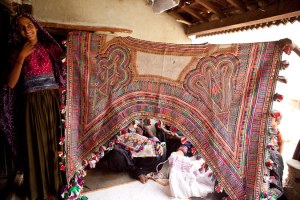 Top and Above: The two images above are for decorating a camel. The gap is for its hump. It took Sajnu-ben one year to complete this work.

This is a Rotla bag, a bag for keeping rotis or bread.

Today, we received the finished Sangam embroidery from Kachchh. Was very excited to see it finished. Below are both versions, the one we did here in Delhi on the computer, and the one Sajnu-ben did in Kukadsar. Our computer generated version looks too perfect perhaps.

Interestingly, we have got suggestions to have the entire English alphabet done in this way. This of course would depend on whether we can get funding for this.

This is the end of this phase of the project for us. I am interested to see how Sangam progresses in the next 3 years as well how people here in Delhi respond to Sangam once the events start here in the fall.

22 thoughts on “Sangam: the Confluence of Craft and Design”