Should designers interfere in modifying the design of work done by artisans, if it were to increase their marketability?

The village of Wand near the Kala Raksha Vidyalaya

On a recent trip to Kachch, I happened to be part of the jury for a class at the Kala Raksha Vidyalaya (KRV) near Wand. Kala Raksha a foundation to protect the crafts of Kachch was founded by Judy Frater together with the initiatives of artisans almost 20 years ago. The vidyalaya or school was started 6 years back.

A view of the class, while Swati (left), the KRV teacher for the current session, discusses a point. Judy is also seen in the picture to the front of Swati.

The schedule of the KRV consists of 2 week classes every few months to give the artisans — many of whom are mothers and have to take care of their family — time to get back to their daily work. Once, during the year they get an opportunity to work with design students from various colleges such as Pearl Academy or the National Institute of Design (NID). On this occasion seven students of KRV were paired with seven students from NID for a period of 2 weeks.

The KRV students had already chosen colors, motifs and style of embroidery from a theme such as ‘dry branches’, ‘the ship builders of Mandvi’ that they had selected in a previous class. In the span of less than 2 weeks the NID apparel design students had to understand the KRV students’ work and start working on expanding the collection and help in the finishing of all products.

Mira-ben showing her design of a bed cover. The patterns were inspired by the shipmakers of Mandvi

Some people were working on creating garments while others on home furnishings. I happened to be at KRV for the last few days of their class because I was working with Sajanu-ben from the village of Kukadsar and the school was closer to her village than Bhuj.

On the day of the critique, we had two judges come in from Ahmedabad. Lokesh and Sonal. Lokesh teaches at KRV and Sonal was the teacher of the NID students present. Additionally, Judy and myself were also judges. A lot of the discussion went over my head since it was in Gujarati and also because a lot of it was too technical. However, I think I did contribute from the point of view of the surface design, cohesiveness of the collection and how appropriate it was for the intended audience. 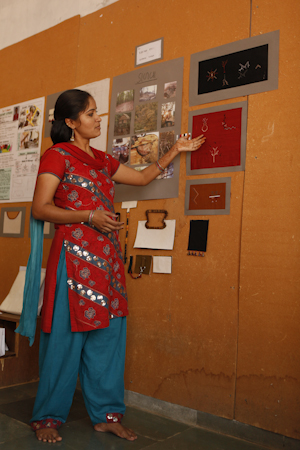 At the end of the day, what I realized is that on many if not all occasions the products were off target. The target typically being the upper middle class consumer in urban India. What I also found out is that the colors and motifs were already decided by the KRV students and the design students from NID could not interfere with those decisions and only help in the finishing and expansion of the collection. There was some frustration in this regard expressed by some of the designers.

This opened up an interesting conundrum. On one hand there were the NID design students with city exposure and perhaps a better understanding of the trends in cities vis-a-vis colors and designs. However, as Judy pointed out the craftswomen were there to learn and choose the colors and motifs on their own. It was meant to be a rare opportunity for designers and artisans to work together and this is why designers weren’t allowed to interfere in color and motif choices of the craftswomen.

While I think that, this is a noble cause and I fully support KRV, I wonder if all this work is in vain if the artisans, after all their hard work, don’t manage to sell their garments and products in the urban market. May be the designers could have given them vital information about the markets in the city, which could have helped them in chose more appropriate colors and designs for their audience rather than their personal likes.

Perhaps, the exchange between artisan and designer should start before and for a longer period of time, since there is so much they can learn from each other such as each other’s culture, behavior and aims as far as the class is concerned. What will both groups do with their education? What did they aim to do? They could have both perhaps visited a home and a market in each other’s cities. These are issues and opportunities that can come up with a longer term exchange.

However, this is the first exchange between NID and KRV students and overall it was nice to see designer and artisan work side by side.

Trishna and Lakhi-ben discussing each of their roles in the project.

6 thoughts on “The Role of Artisans and Designers”