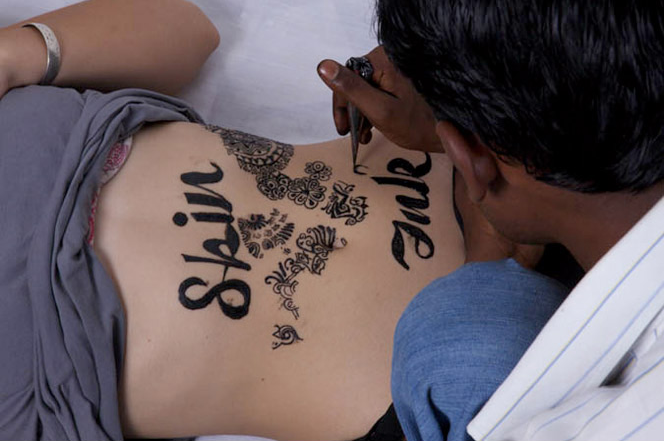 What is Indian graphic design? What is Indian typography? These are some questions that I have been trying to answer since my return to India a few years back. I found most of the design work done in India to be very “western looking”.

Unlike in India, graphic and typographic design in countries such as Japan, America or Holland has a style that goes beyond the language and script in use in that country. They have a unique cultural aspect in their typography and design work — one knows immediately that a certain design belongs to, say, Holland just by looking at it. Unlike those countries, India, is struggling to create its own unique typographic identity. This is perhaps caused by both colonisation and globalization. On one end is the rich Indian visual culture that predates modern graphic design and on the other end a powerful visual culture that globalization is bringing to the everyday Indian from the west.

Ours is an oral tradition and seldom in the history of Indian visual art and culture have text and images been combined together, say, in the form of books. Even story-telling and narrative devices, such as the kaavad or palm-leaf art are devoid of text. Perhaps, the only time text and images have been used together in the subcontinent, is on sculptures in temples. Additionally, the form of the letters have been determined by the tools used to create the script — thus letter forms look pretty similar within a medium and usually no innovative styles were deemed necessary.

However, typography is becoming an important part of today’s visual culture in India. Two current trends are extending the boundaries of type even further — the creation an ever greater number of typefaces especially in non-Latin based scripts and a simultaneous movement that explores handmade typography to new heights. At Ishan Khosla Design, we are working on exploring the latter.

In an effort to understand our culture and tradition, we have started working on projects where Indian art and craft are combined with contemporary typography — typecraft or typography inspired by craft. This results in typographic forms and designs are rooted in our own culture and hence are unique to us.

Fig 1. We worked with a mehndi (henna) artist, Raju, to create the text for the book cover of Skin Ink.

Fig 2. Tal Patra or Palm Leaf Art by Bijay Kumar, an artisan from Raghurajpur, whom we’re working with in Odisha.

Typecraft is based on the symbiosis between typographic language, meaning and the medium in which its being created. It is the coming together of the designer and artist, urban and rural, and, the computer and the hand. The explorations have been done on a range of materials — textile, palm leaf, skin and wood. The various crafts we have worked in to date, include Kaavad, Kachchhi Applique (Fig. 8), Leheria (Fig. 9), Mehndi (Fig. 1), Pattachitra (Fig 2.) and Rabari Embroidery (Fig 7 and 8).

When we worked on the visual identity for Sangam, a three-year dialogue on craft and design, we started by looking at the various forms of Kachchhi embroidery such as Soof (Fig. 3), Kharek (Fig. 4), Ari and even Patchwork (Fig. 5 and 6). 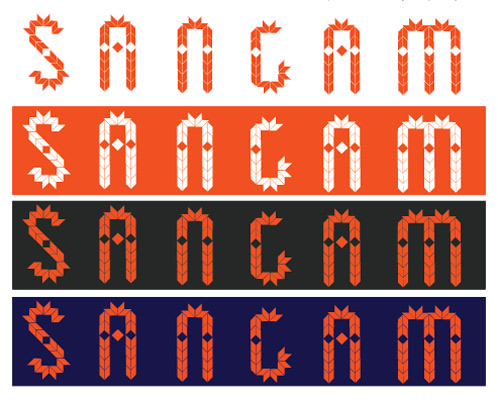 We honed in on Dhebaria Rabari embroidery since it was non-geometrical and allowed for more possibilities in typecraft creations. Once we created a digital version of the letters, that were based on the visual form of the embroidery, we worked with Sajanu-ben, an artisan in Kachchh, to help physically create the form in cloth. Of course, we could have just ended the process on the computer, but the idea of creating the typecraft on cloth with embroidery and applique seemed to complete the circle of this symbiosis. In this way typecraft, helps artisans to innovate and give them enough income to sustain their livelihood.

Fig 7. The identity for Sangam: the Australia India Design Platform, inspired by the Dhebaria Rabari embroidery.

Fig 8. Sajanu-ben’s version of Sangam, based on our interpretation of the work and style of her ancestors.

The key for creating a good typecraft is to first understand the craft and its properties.
Using the language of the craft, one should then start rendering the typographic forms. This rule works better in crafts that have a well-defined structure, such as embroidery and tal patra, and less so in any painted craft.

A corollary of Typecraft of course is typography inspired from craft and not created with the help of an artisan. But it is still considered Typecraft. (Fig. 3–7)

An example of the latter is, the typography created in the palm leaf art or tal patra for Sangam. We took motifs from adivasi or tribal, art and craft — to create these letterforms. The form is still legible but the layer of art has transformed the letter forms into something uniquely Indian.

So far the explorations have been in the Latin script only, but we hope to make it region specific with the craft and script perhaps belonging to the same region. The goal is to create 28 typefaces from 27 states in both Latin and the local language if we can get funding.

In conclusion, in the vast heritage Indian traditional visual arts and crafts where a vocabulary has been created over millennia, it is very challenging to improvise this into contemporary typographic language. But, the search for roots and identity doesn’t imply reproducing the original, indigenous tradition but transforming it through a contemporary design perspective. Through a bold new movement, designers across India, are collaborating with artisans, and merging traditional and contemporary, Indian and International, Art and Design. The movement towards typecraft is transforming Indian typography and design by making it unique to its own roots and culture. The designs are rich in meaning and form, and application.