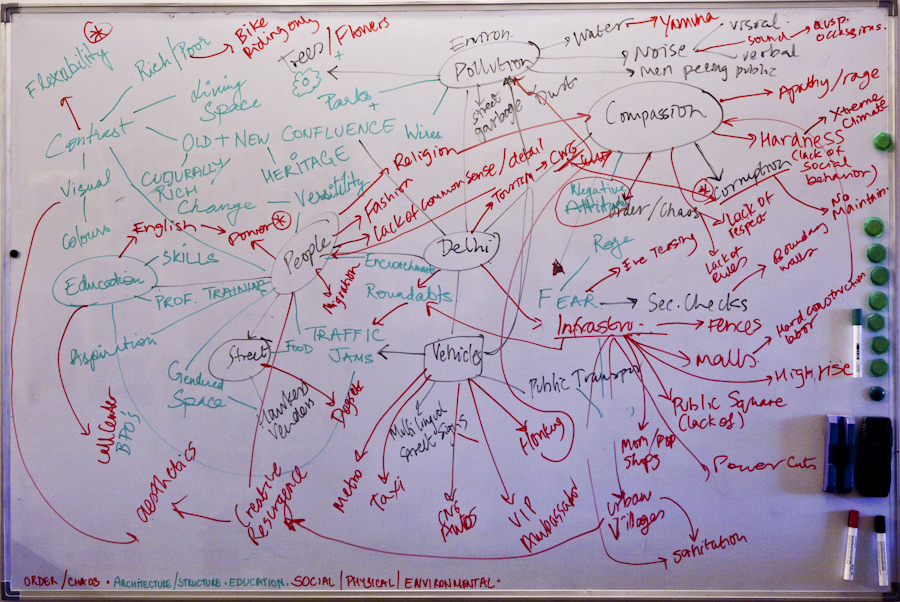 In 2011, I was asked to hold a workshop on the future of the city I live in, Delhi. This was a part of the second round of public days held by Arch I, in conjunction with the Dutch Embassy for ‘Delhi 2050’. Delhi 2050 was started by Anne Feenstra, with support from the Dutch DFA, as a response to the failure of the city government’s efforts to create a blueprint of the city. It is more a process and a dialogue than a conclusion, since Delhi like any big city is in constant flux — a blueprint would be obsolete the very moment it is released.

I conducted the workshop with curator, Amrita Varma at the Ishan Khosla Design studio. Present at the discussion were Rianne Makkink (Studio Makkink and Bey), Vic Cautereels (Design Fixion) as well as Theo Groothuizen, Sara Cohen and Ila Singh from the Dutch Embassy. Additionally Shantanu from NID, Elisabeth Pfahl and Michael Boy, both product designers based in Jaipur were also present. Lilly Irani, an anthropologist from the US, was also present at the discussion, as were the team from Arch-I and other designers.

We started the dialogue with a mind-map of the city of Delhi (below). And listed all the major positive and negative aspects of Delhi such as pollution (visual, environmental), compassion (or the lack of), streets, trees, infrastructure, education and people. A lot of the comments were negative and some of the Dutch speakers were wondering why there was such a lot of negative points being raised to which I had commented that design only exists if there is a challenge or an issue that needs resolution.

Vic also talked about vandalism and how the Netherlands solved it by introducing trains that have leather seats of high quality which no one would vandalize. However, I did voice the fact that so many people go without food and water in the city, and in India in general that vandalism is too luxurious a problem for us. 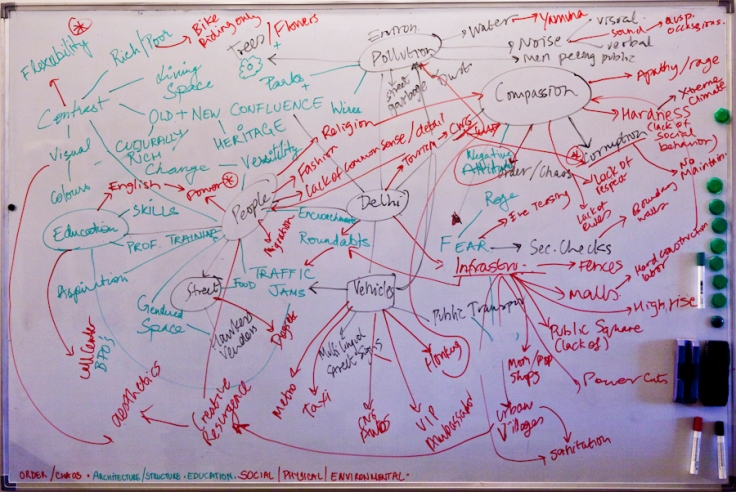 Some of the salient points raised in the mind map were:
1.  People > Lack of compassion > self-centeredness > corruption & power > fear and hate > crime against women > gates/fences and walls > hardness of people and climate >
2.  Infrastructure >
3. Education >
4. Streets and Vehicles >
5. Environment >

The following points are what we concluded with after the 2 hour session:
We need more accountability of the State and People, which translates to less corruption and vested interests. The question remains, how do we achieve this?
An idea I suggest is to introduce a class for school children on Ethics, Morals and How to Behave in Society. This could make a huge impact.